This family was formed yesterday in the temple. They were the only ones present for the sealing except for the witnesses, Jim and I.  Neither of their  families  knew they were coming, though I got the impression it was more the when than if.
Some of Fiona's extended family were members of the church so she knew about the church and had gone to family baptisms.  But when the missionaries stopped her on the street, she told them she wasn't interested.  She told them the same thing when she met more missionaries a few weeks later and again when she met some a short time after that.  Finally the fourth time missionaries talked to her as she came out of her house, she agreed to listen.  She figured Someone was trying to tell her something.  She accepted a Book of Mormon, listened a little while but then dropped the lessons.
However, she said she woke up every morning thinking about the church and as she read the Book of Mormon all of her childhood questions about religion were answered.  She said it was like she had all these rocks of religious knowledge in a basket and the Book of Mormon filled in all the empty spaces.  She decided to try living the Word of Wisdom for a day and gave up her coffee, As promised,  she felt better and happier. Finally she called the bishop and explained she was a single mother and didn't know if she would fit in but was interested.  Three weeks later she was baptized.  She went to a Single Adult activity later and met Christian, from Norway.  They have dated across the North Sea and finally were married and sealed by Jim. 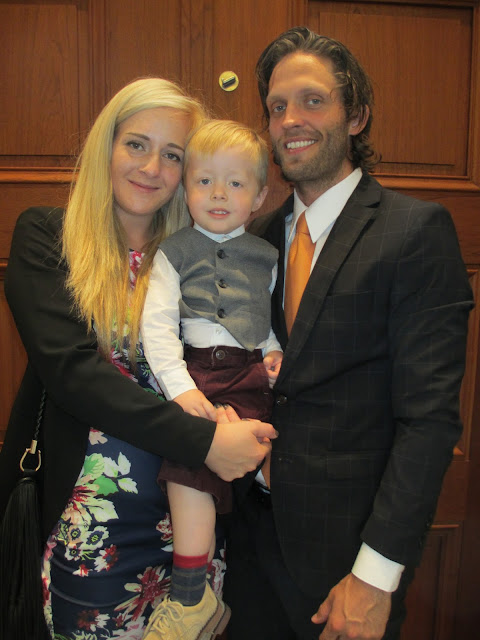 Sebastian, is one blessed little boy. With the permission of his biological father, he was sealed into this eternal family. He was darling. Looking in the mirror when he was all dressed in white, he exclaimed, "I'm an angel."