This was the view we had as we opened our door to go to the temple this morning.  It was 8 am and  a beautiful sunrise and the beginning of a  lovely day in the temple. 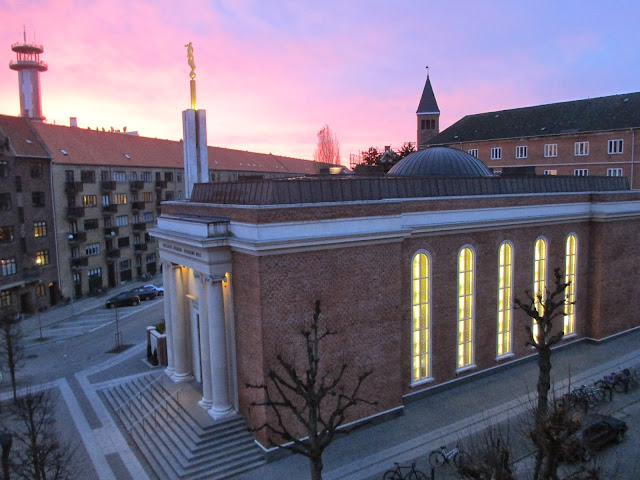 We had a darling girl come to the temple for the first time today.  The sister missionary who taught her and prepared her for baptism and the sister missionary who took over, both flew from the U.S. to be here for the momentous day. She met the church though a classmate at school, Renae' Nielsen .  Some of you will know him.. She had gone to the State Church her whole life and was interested in religion.  They talked a lot about religion and when she came  to church she felt so at home and was baptized 2 and a half years ago today.  Her parents are not too excited about her being in the church and she said if they knew she had come to the temple they would ask her to leave.  Hence it has taken her a while to feel ready.  In the end it was the Lord who made the decision and she knew she was supposed to come.  She has just graduated in audiology and helps people adjust to their cochlear ear transplants.
There were 5 carloads that came from Odense to be there to support her, so many lovely people.  There was a girl from Russia who is visiting a young man she met at Festi Nor -which is a Young Single Adult convention, a girl from Viet Nam and another thrilled teen age girl who was  baptized 3 months ago and the ward has brought her over twice to do baptisms for the dead.  Such a good day in the temple!