Heaven Is In Charge

With Elder Perry's death and Elder Kearon's visit this week, I have realized again, that this Church is really directed by Heaven, God and Christ are in charge.
With Elder Perry's quick demise, it is obvious he was not to be the president of the church even though he was third in line.  His further work in the Kingdom is on the other side.
Elder Kearon's conversion story adds to my conviction that Heavenly Father knows each of us and we each have our own set of responsibilities and things to accomplish here on the earth.
Elder Kearon was 26 when he joined the church.  He is from England and one night, he and some friends invited some girls to go dancing, who "happened" to be on a BYU Study Abroad Program.  They talked about the church and he thought they were nice girls but with outlandish ideas and amazed that anyone could belief what they did. One of the girls invited him to America where he lived a short time, saw the church working and it softened his attitude a bit.
When he returned to England, a set of sister missionaries talked to him on the street.  He said he knew all about what they believed and he wasn't interested, but he'd be happy to buy them some lunch as long as they didn't try to convert him.  They kept meeting and "gently" taught.  Finally they asked if he would like a "blessing."  He agreed and they meet with a senior couple in the area.  The brother gave him a blessing and he said it was like a window opened and changed everything.
Following his baptism he meet "Jen" who was on another BYU Study Abroad for 6 months.  They dated for the 6 months she was there and were eventually married.
Can you imagine your 19 year old daughter coming home from England and telling you she wanted to marry a Brit, brand new member of the church who was 9 years older than she was! They worked it out and what a blessing for them and everyone involved.
Again, a testimony that God knows each of us and what we are to do here to build the Kingdom. 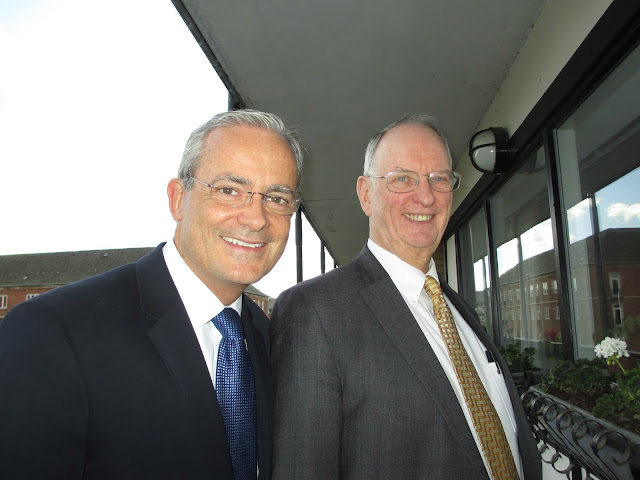